After spending a month traveling down the west side of California, we left San Diego and cruised east on Interstate 8. We traveled through the Imperial Valley, crossed the Colorado River and went into Arizona. It’s a great drive and the scenery was amazing! We stopped in Yuma for the night and took our nephew Andrew out to dinner.

Then, we diverted north to Tempe and spent a couple nights at Apache Palms RV Park while we visited family friends. The park had a parking lot feel – all pavement and gravel because we were in arid Arizona – but also a very nice swimming pool and the sites were a good size. While we were in Tempe, we took a day trip to Prescott and met an old friend for lunch at the Peacock Dining Room which is in a historic hotel, the Hassayampa Inn. Prescott has lots of cute shops and it was enjoyable to spend an afternoon strolling around the town.

We left Tempe, went back south, caught Interstate 8 again and headed east to Tuscon. There, we stayed at the RV Park at the Pima County Fairgrounds. It was a huge gravel area with tons and tons of sites.  It was a convenient place to park the rig for a few nights while we made day trips.

Old Tucson was a movie set for more than 400 films and TV shows, but is now a theme park open to the public.

The buildings in the photo collage above were in films such as: Arizona, Rio Bravo, and McLintock with old school actors such as John Wayne, Robert Mitchum, James Caan, Dean Martin as well as more recent movies such as The Three Amigos with Chevy Chase, Steve Martin and Martin Short. 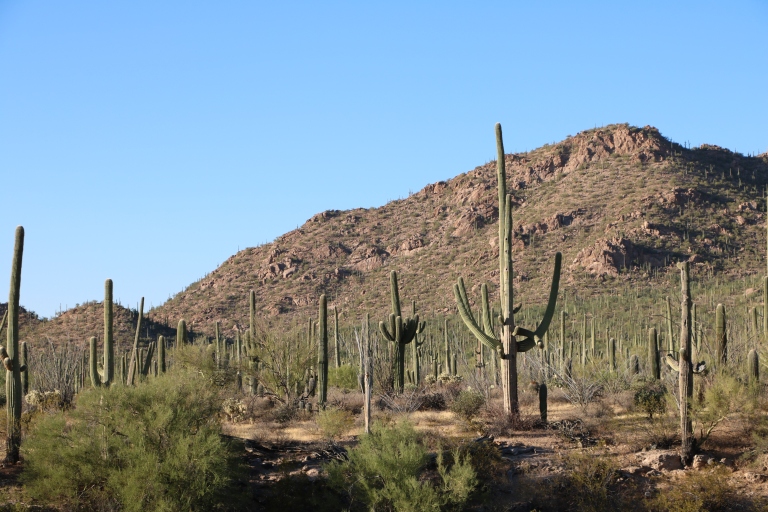 We hiked around Saguaro National Park and were amazed at the huge cacti that looked like were stuck in the desert land like needles in a pin cushion.

Petroglyphs or prehistoric art can be seen on rocks along some of the hikes. 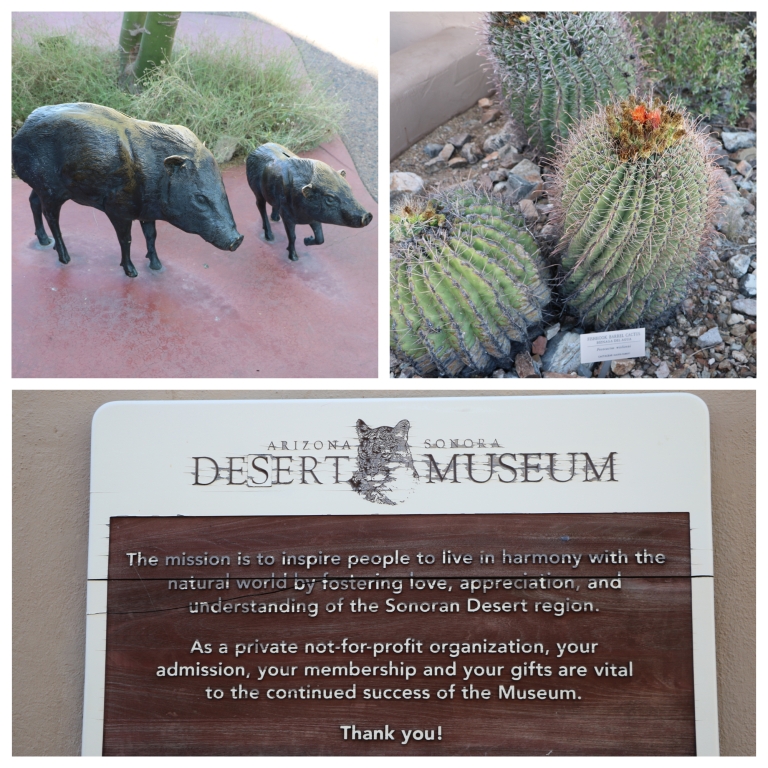 We stopped by the Arizona Sonora Desert Museum that was right by the national park. There was a fee to go in and it was almost time for it to close, so we just walked around the grounds.

We only spent one day at the Pima Air and Space Museum but we probably needed three to see all the many exhibits in the multiple buildings.

Henry and Louise Timken of Ohio were the owners of the Leer Jet shown above. Both of them were licensed to fly and they took turns being pilot and co-pilot. Louise’s visor and lucky flying shoes were on display. They upholstered the plane’s seats with a zebra skin from an animal they had shot while on safari in Africa. They flew the plane from 1964 to 1992. 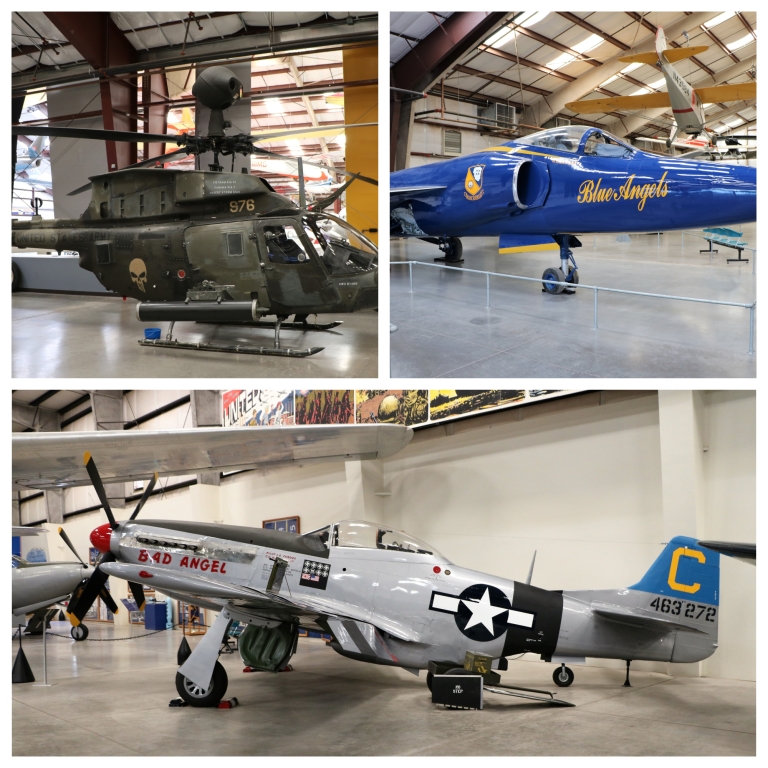 Another interesting story was the Bad Angel plane flown during WWII by Louis Curdes of Fort Wayne, Indiana. Curdes did many heroic things while being a fighter pilot, but one of the strangest activities – for which he was a awarded a Distinguished Flying Cross – was shooting down a friendly aircraft. He noticed that an American plane, the Dakota was trying to land on the Japanese held island of Batan. If it did, the pilot would have been tortured and taken as a prisoner of war and the Japanese would get the American aircraft. So he shot out both of the Dakota’s engines. Then Curdes flew cover while the pilot was picked up by a rescue plane. 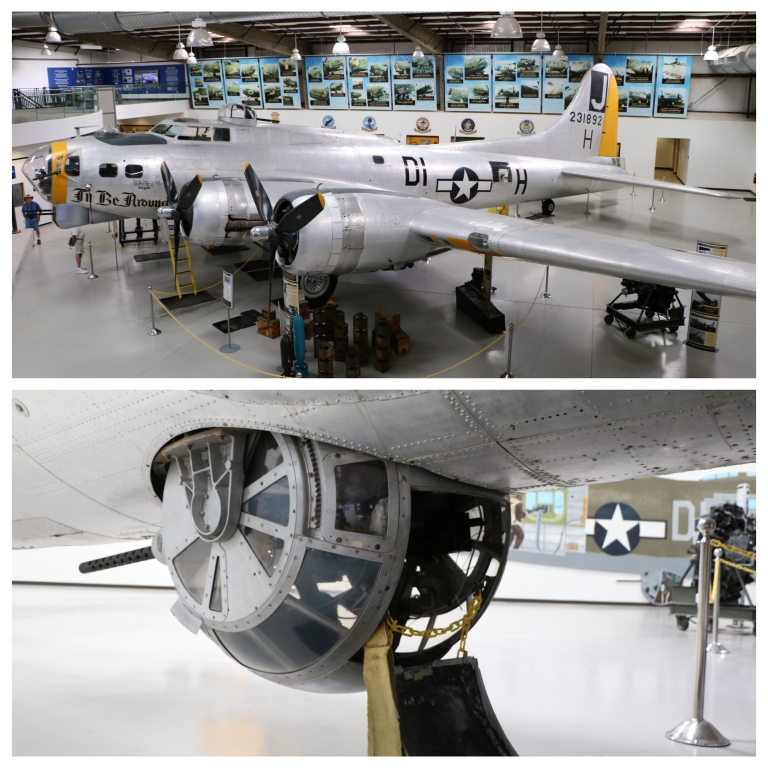 We were awed by where the ball turret gunner had to sit in a Boeing B-17 – right underneath the belly of the plane.

After our time in Tucson, we stopped in Tombstone, Arizona on our way home.

The area where Wyatt Earp and his buddies had the famous shoot out in the OK Corral has been preserved and the incident is reenacted several times daily. I was so glad to see the old town was intact unlike Deadwood, South Dakota which was disappointing.

After being away from home for over four months, it was time to return – and plan the next trip!