Just before this portion of our trip, we spent a lot of time visiting Civil War Sites.  Bridging that experience and the one described here was a quick visit with Roy’s brother Bruce and his wife Betsy. Then we took a few days to spend some time at Freight Liner in Gaffney South Carolina.   The Battle of Cowpens took place there so we decided to check it out. Imagine Roy’s surprise when we realized it was a Revolutionary War site, not a Civil War site! It was a refreshing change and the National Park there is well maintained. It had great walking trails plus a nice visitors’ center. It actually set the stage up for our next stop when we visited to the Historic Triangle: Colonial Williamsburg, Yorktown, and Jamestown. There are actually five different destinations that comprise these three sites; both Yorktown and Jamestown have living history type museums besides their original locations.

Williamsburg was the capital of Virginia from 1699 until 1780 when it was decided that Richmond would be a better location. It became just a quiet little town by the College of William and Mary. In 1926, a local reverend convinced John D. Rockefeller that the town should be preserved. Eighty-eight of the original colonial buildings were still in existence but a lot of the historic meeting places of the patriots that planned the beginning of our nation were crumpling or completely razed. Rockefeller began quietly buying up the land and restoring buildings until it became a huge 300 plus acre living history museum.

The highlight for me was the Governor’s Palace. The original building was destroyed in a 1781 fire but it was rebuilt during the Williamsburg restoration from sketches made by Thomas Jefferson when he lived there in 1779. I loved the gardens and was surprised by the bright colors in the interior – especially the shocking neon green. The entrance was like an armory; swords and muskets hung on every inch of the wall.

When we entered the museum, we were told that we had to have reservations if we wanted to eat in any of the taverns. Roy had been there as a child and he remembered eating in the Kings Arms Tavern, so he wanted to go there for dinner. They were fully booked but but they told us to check back later to see if they had a cancellation. We wandered over there at around six, and sure enough, a party didn’t show up. We had an interesting peanut soup (Click Here for Recipe) and venison, rabbit, and duck pie. It was fun to eat by only candle light and we were entertained by several in character type period actors.

The actual site of the Yorktown Battlefield is a National Park.  American forces with help from the French defeated the British here at the end of the Revolutionary War.  We were lucky enough to be there on the weekend of the anniversary of the surrender. We got to see reenactors shooting off cannon and heard a battlefield walk talk with a park ranger. Some of the original earthworks are still visible.

The Yorktown Victory Center has a huge indoor museum along with a Revolutionary War encampment and a colonial farm. I was interested in the “stove” the soldiers used. They would make a kind of buried oven in the ground and cook over that in hopes that the enemy wouldn’t see their smoke. At the farm, ladies were demonstrating how all the cooking and baking was done using fire and hot embers over covered pots.

The same foundation that maintains the Yorktown Victory Center also runs the Jamestown Settlement. It has a Native American Village, a recreation of the fort, and replicas of the ships the settlers traveled on. I have to say there was a bit of cognitive dissonance in seeing a Caucasian teenager playing the part of a Powhatan native, but I admired how the guy was obviously into history. I was also caught off guard at the fort buildings – I was not expecting them to look like English country cottages with thatched roofs.

Historic Jamestown is the site of the first permanent English settlement in the United States. It was actually the worst place to settle since it was on swampy land and had very little access to fresh water. They chose it because it seemed to offer the best protection against attack from the Spanish who already had a huge foothold in the New World.

There have been several periods of excavation of the area especially around big anniversary dates of the 1607 building of the fort. Original footings have been found and bricks were placed on top of them to mark the spots.

I thought it was so interesting how many of the artifacts that were found came from other European countries. For instance, pottery from Spain and tiles from the Netherlands were unearthed. Obviously the settlers brought what they loved when they sailed over from England. 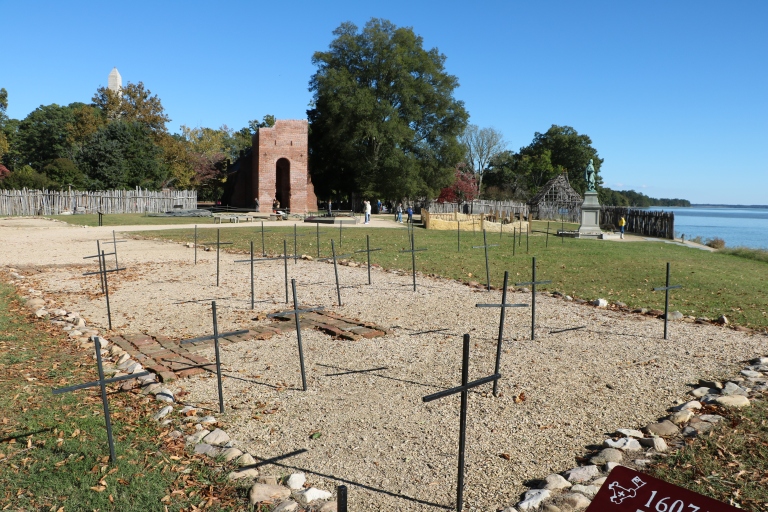 The settlers had a terrible time surviving the first few years. Many of them were just business men who had no clue had to farm or do anything for themselves. Relations with the Native Americans were strained and they were afraid to even leave the fort to go out to hunt. Recent excavations unearthed evidence that there was some cannibalism in the colony. 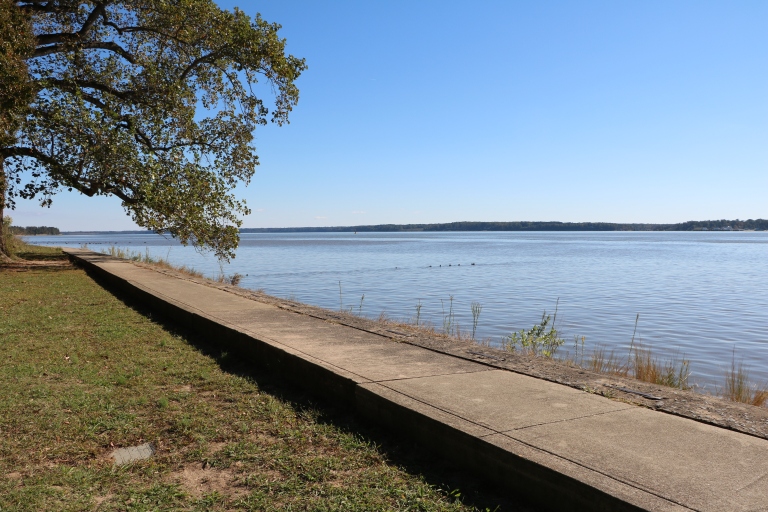 A seawall was built around 1907 because the shore land was eroding away. A park ranger told us that at least 25 feet of land was swept away before efforts were put in place to preserve it.

During the time we were exploring the Historic Triangle area, we stayed at the American Heritage RV Park . It was so, so nice – very clean and the staff bent over backwards for the patrons.

After learning a little bit about the beginning of our country, we decided our next stop would take us back to Roy’s study of the Civil War.  We left Williamsburg and headed toward where the war came to an end – Appomattox…