After Allison left to join Jennifer for more world traveling, we got ourselves together and took off a couple days later. Besides filling up the tank with diesel and propane, we decided to wash the RV. We got lamb’s wool pads, extender poles, and baby shampoo and found it took most of three hours to do the job.  It was worth seeing it nice and shiny again after picking up a ton of dust this summer.

We made it to Pennsylvania the first night where we stayed in a Walmart parking lot. The next day we traveled on to Gettysburg and checked into Gettysburg Campground. Most of the time we spent there was rainy and in the ’50s, and I never got a photo. I would give it maybe a 3.5 out of 5. It probably would have rated a higher score if we had stayed in the wooded area instead of the bare gravel sites designated for “premium motor homes”. I felt we were on the “low ground” and I got tired of steering Vanilla around huge puddles when I was taking him for a walk. 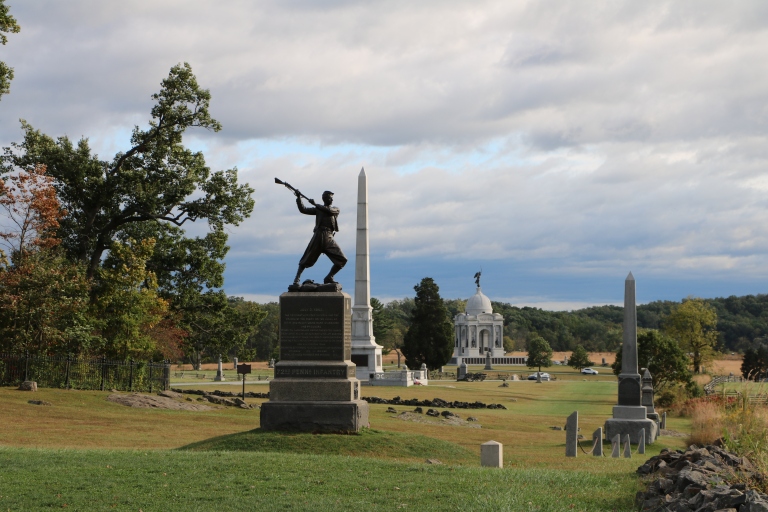 Despite the yucky weather, we enjoyed visiting Gettysburg National Park. There is no way anyone could see it all in a day. The new visitor’s center has a huge museum that took us several hours to get through. The park ranger talks and walks were well worth participating in. Their insights and lore were fascinating. Many of the stories were heartbreaking. Honor and fighting to the death for beliefs held dear were everything to those soldiers. Thought of as the tide turning battle of the Civil War, it was a three day fight with terrible loses for both sides.

We saw all types of tours and all nationalities of people visiting the park.

Roy and Abe had lots to talk about.

Over the years the National Park Service has acquired many of the original buildings on the battlefield.

Statues and monuments are abundant everywhere in the park and are amazingly detailed. 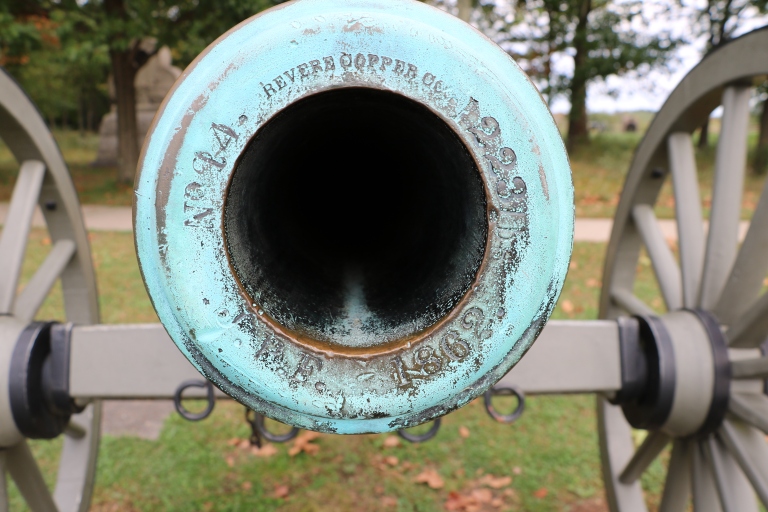 Many of the cannons in the park are the actual ones used in the battle. 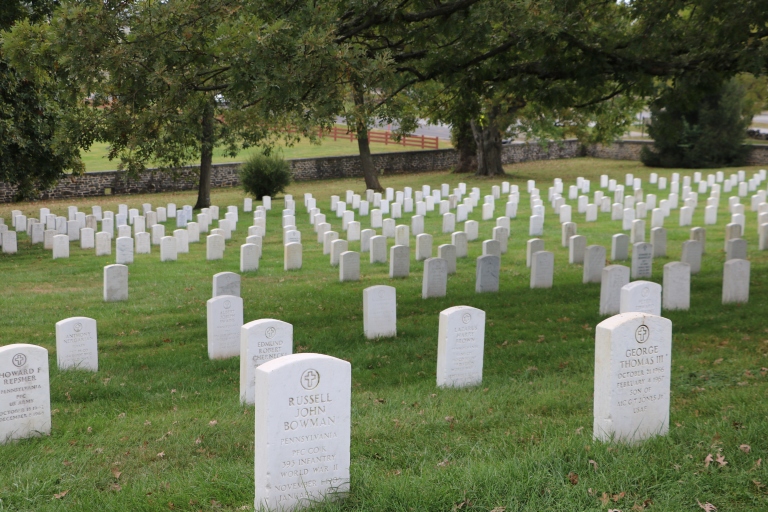 We listened to a Ranger Talk at the Gettysburg National Cemetery . 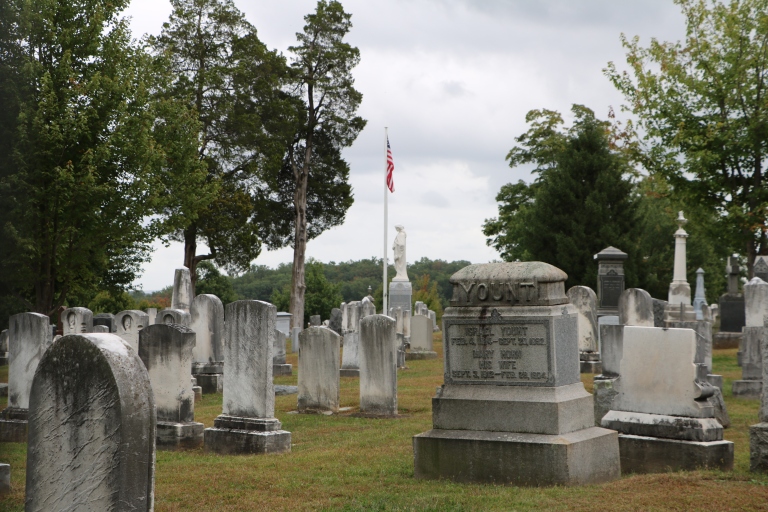 The photo above is actually privately owned Evergreen Cemetery which is right next to Gettysburg Cemetery. At the time of Lincoln’s famous speech, this would have been empty of grave sites. Historians belief that the Gettysburg Address was delivered where the American Flag is now flying.

Most of the graves in the Gettysburg cemetery are flat and are laid out in a circle surrounding the monument on the above left. The park ranger pointed out the ancestor of Tricky Dick Nixon. Although Nixon’s mother’s family were Quakers, his father’s side was not. 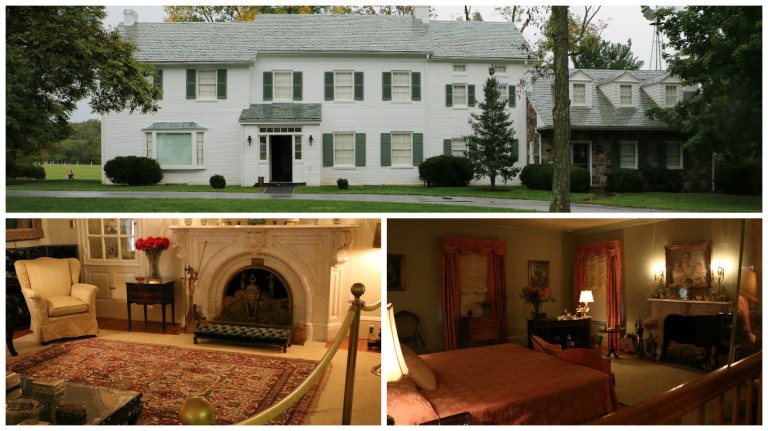 We boarded a bus at the Gettysburg visitor’s center and took a short ride to the Eisenhower National Historic Site. President Eisenhower and his wife Mamie bought the farm and used it as a get-away while he was president as well as afterwards. Mamie loved pink! She had it all over the house – especially in the master bedroom. She said that once a women reached the age of 50, she earned the right to stay in bed everyday until noon. Ha! The photo on the lower left shows a coffee table that was a gift from Korea, a rug given to them from the Shah of Iran, and a fireplace mantle that was discarded when President Grant’s wife redecorated the White House. Apparently, Eisenhower was the last president allowed to keep gifts from head of states. According to the guide, almost everything in the house was a gift from somebody, even the pink lighting fixtures.

After Gettysburg we moved on to the Sharpsburg area in Maryland. We stayed at a really cute RV park, the Hagerstown/Antietam Battlefield KOA

This place was super family oriented. It had a little petting zoo, a putt putt golf course, magic shows, a craft house, and even a haunted house. The sites were spacious and some bordered a large beautiful creek. The campground had a “diner” and would even deliver pizzas via golf cart right to your site.

The area was filled with historic places to visit. The first thing we saw was Antietam National Battlefield. The South called it the Battle of Sharpsburg and the North called it Antietam, but Roy called it a horrible slaughter.

The picture above was taken from an observation tower. It shows the visitor’s center in the very back, in front of the treeline to the right. In the foreground is what is left of a sunken road where hundreds of soldiers were killed.

Burnside’s Bridge is a famous part of the battle. Northern General Ambrose Burnside (where the side burn fashion originated) fought for hours to capture the bridge from the confederates. From all accounts, he was a bumbling kind of guy. Later on towards the end of the war, Burnside came up with a scheme of using massive amounts of TNT. It ended up creating a huge crater that trapped his men and made them sitting ducks for the confederates to pick them off. Burnside was removed from command for the rest of the war.

As you can see by the map below, Antietam is close to several places of interest: Harper’s Ferry in West Virgina; Monocacy National Battlefield in Frederick, Maryland; and the Chesapeake & Ohio Canal National Historic Park in Hancock, Maryland. We were able to take day trips to all of them. 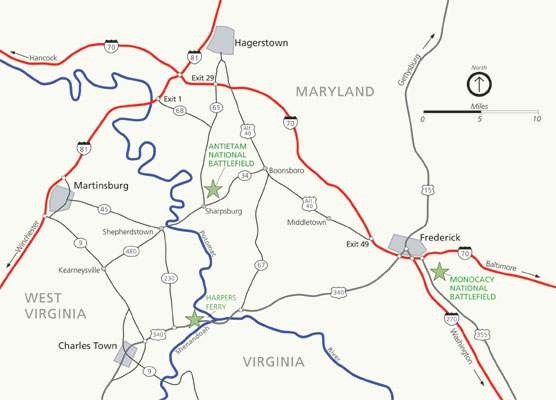 Harpers Ferry National Historic Park was a restored little town that was basically just ruined because of the Civil War, but also floods. It sat between the Potomac and Shenandoah Rivers which made it attractive for building factories and George Washington’s choice of location for the United States National Armory.

In 1859 John Brown tried to stage a slave uprising here which focused the Nation’s consciousness on the Abolitionist Movement. He, his sons, some slaves, and hostages were captured in this original building shown above. John Brown was later hanged but the incident began to turn the wheels of national thought toward war.  Click HERE for an interesting article on his life. It gives me a renewed sense of respect to great leaders such as Martin Luther King and Mahatma Gandi who brought about social change without violence. 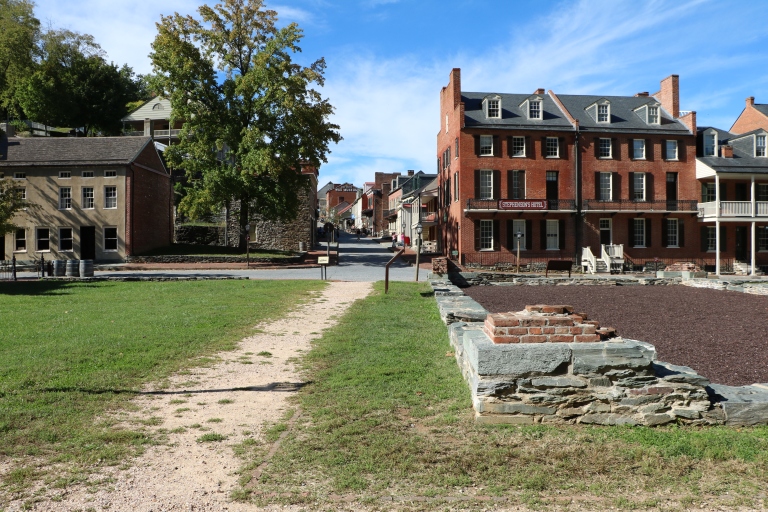 The restored town has several museums, shops, and cafes. During the Civil War,  it changed hands between the North and the South countless times. There is also a bit of Louis and Clark history here as well. They came to the armory at the start of their epic trip to get all weapon-ed up.

George Washington also had a big influence is pushing for a national canal system. We drove over to Hancock and saw part of what was left of the old Chesapeake & Ohio Canal. The railroad made it obsolete almost immediately after it was finished. 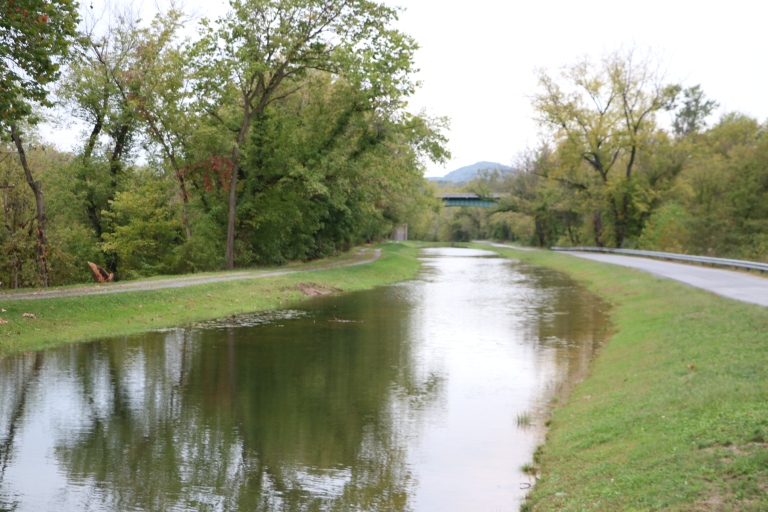 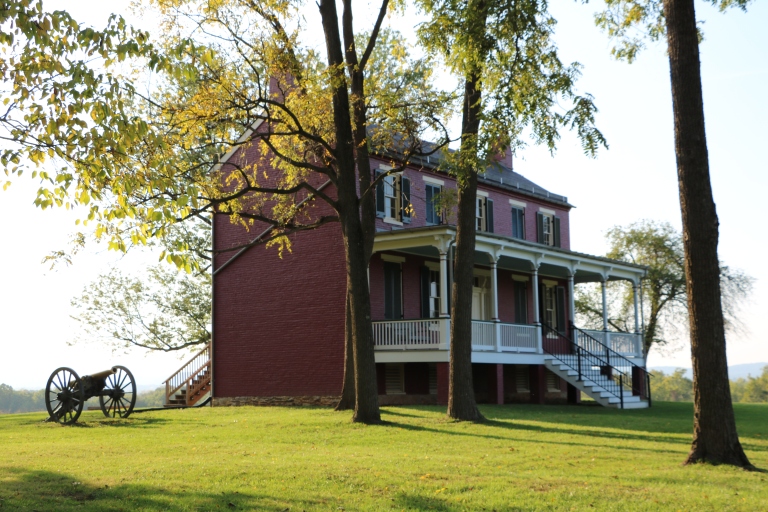 It had a museum and a driving tour with five stops. This battle held particular interest for us because Northern General Lew Wallace from Crawfordsville, Indiana held off Confederate General Jubal Early on his way to attack Washington D.C.  It allowed the North to have time to send more troops to the capitol. By the time Early got there, his army was worn out, tired, and had lost many men. Lew Wallace went on to write a block buster novel, Ben Hur, and was also Territorial Governor of New Mexico and US Minister to the Ottoman Empire.

The building shown on the left above, was an overseer’s house. Beyond the house, footings were found of several slave cabins.

At this point in our trip, Vanilla felt we needed a break from filling our brains with countless Civil War trivia facts. We headed down to Freightliner Chassis Service in South Carolina with stops on the way…