New Hampshire is sandwiched in between Maine and Massachusetts and only has 18 miles of coastline between the two. During the month of September, we floated in and out of it a few times.

The first time we entered New Hampshire was on our way to explore Maine, and we spent the night at a Walmart in Gorham. It was just north of the White Mountains National Forest and I have never seen so many all terrain type vehicles in the parking lot and on the roads. At that point we didn’t realize that we would return back to the area for a day trip to Mt. Washington.

We weren’t prepared for the strenuous hike and we heard that the auto road was so scary that it wasn’t enjoyable, so we took the Mt. Washington Cog Railway.

It was definitely a great experience. On the way up and down the three hour trip (one of the hours is spent at the summit) the brakeman  talks about the history of the area and the 150 year old railroad.

The cog wheel on the bottom of the train car latches into and goes up the raised section in middle of the tracks. 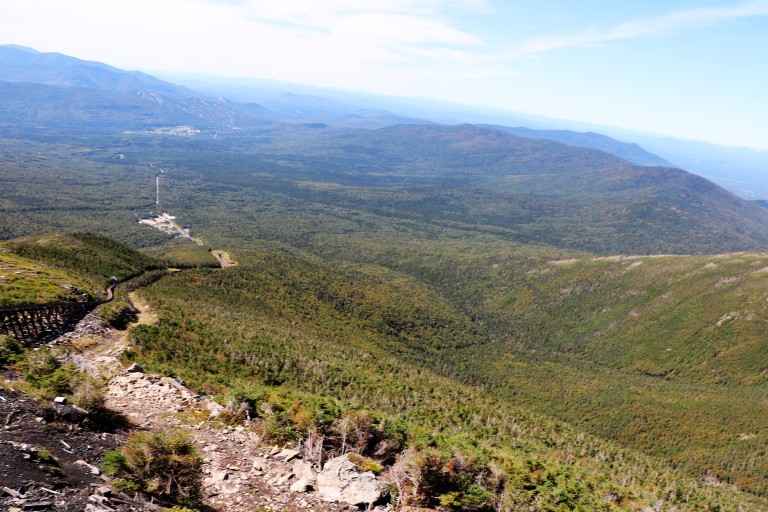 The grade is incredibly steep. I stood up, turned backwards and leaned out the window to take this photo.

As we neared the top, we could see lots of hikers. Over the years, people have lost their lives climbing up to the summit –  mostly due to the unpredictability of the weather.

It was probably in the lower 50s up at the top since the average temperature is said to be 52 degrees on a sunny day. We were glad we had brought winter coats with us. It’s barren at the summit and some of the highest wind speeds ever recorded were measured by the weather apparatus equipment up there. Hurricane like gusts are averaged 110 days a year.

Years ago, there were some fancy hotels for the well to do to stay in, but after a 1908 fire the rustic Tip-Top House was the only building left. It was built in 1853 but ceased being used in 1968. It’s now a state historic site. 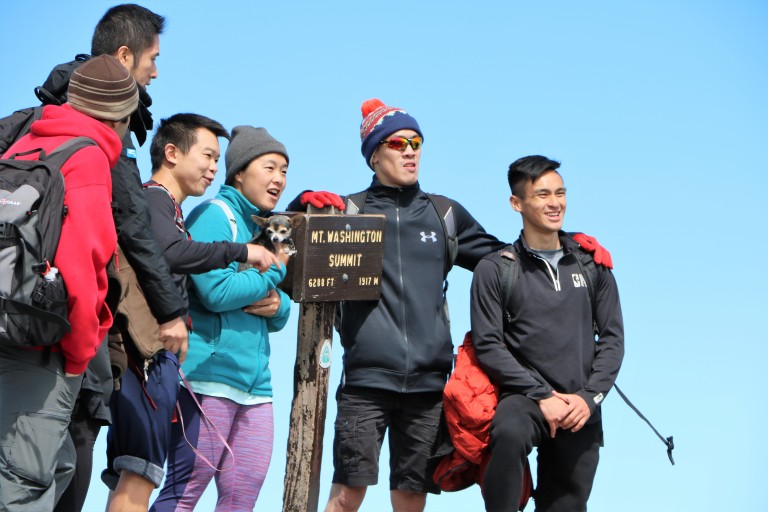 I couldn’t resist taking a photo of these hikers who proudly were posing by the summit sign, mostly because I was enchanted by their little dog.

Near the time when our hour allotted for exploring the summit was over, we could see the next train arriving to take us back down the mountain.

At the end of September, we stayed at two New Hampshire campgrounds.  Tuxbury Pond RV Resort in South Hampton and Pine Acres RV Resort in Raymond were both Encore owned. It was evident that a majority of people kept their campers there all the time; there were permanent decks and sun rooms actually built onto them. The campgrounds had lots of mature trees but the roads were narrow and the sites tight. Calling them “resorts” was definitely a bit of a stretch but each a pretty pond.

This was Tuxbury pond. Around the edge of it were several boats turned over on the shore. A couple were hanging out in the water like this one. I guess the folks that are there all season just leave them there. The leaves were just starting to turn.

We took a day trip to Portsmouth and I was so surprised at how much history there was there. It was settled as an English colony in 1630 and initially named Strawbery Banke. It was once the capital of New Hampshire and thrived at ship building, beer brewing, and hosiery production. It did best economically during wars, but during peacetime and after factories started making hosiery, it went into a depressed financial state. Because nothing was booming, the existing buildings just sat there, and still are standing today. Now the town has a booming tourist business.

In the photo collage above, starting at the top clockwise: the historic part of town has tons of shops and restaurants; North Church is the landmark on the old town square; the North Church Steeple; St. John’s Episcopal where visiting worshipers included George Washington and Paul Revere; the door to Daniel Webster’s’ law office; the perimeter edge of the Strawbery Banke Museum which is a group of preserved houses and buildings.

Tugboats help huge ships navigate their way in the port since the current is very strong.

The Memorial Bridge is a Portsmouth icon. It was interesting to see it raise up and down as boats came through. 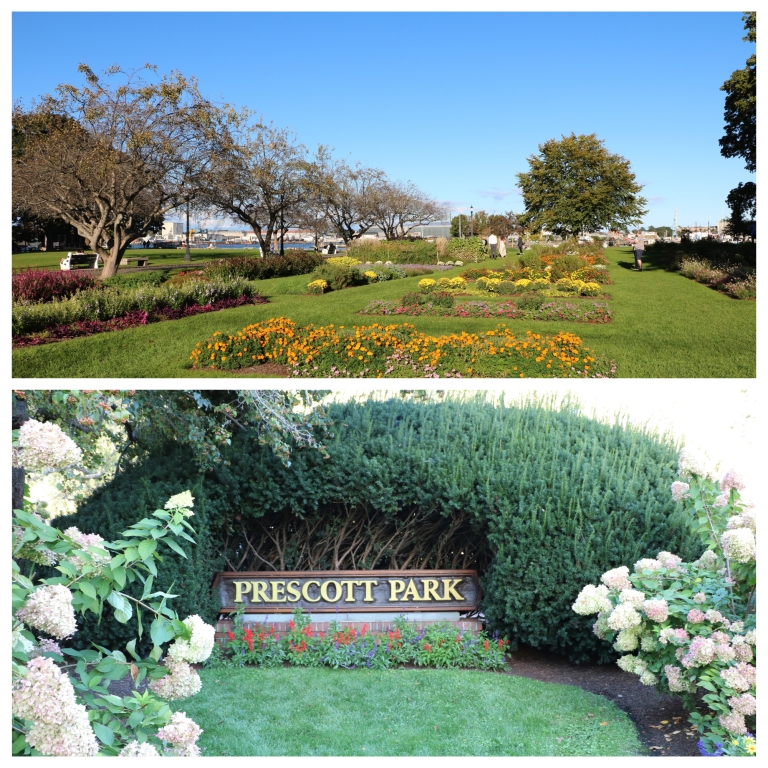 Prescott Park is on land along the Piscataqua River in an area where the ladies of the night and other unsavory characters were said to frequent.

Part of the park includes some public piers where people can dock their boats. 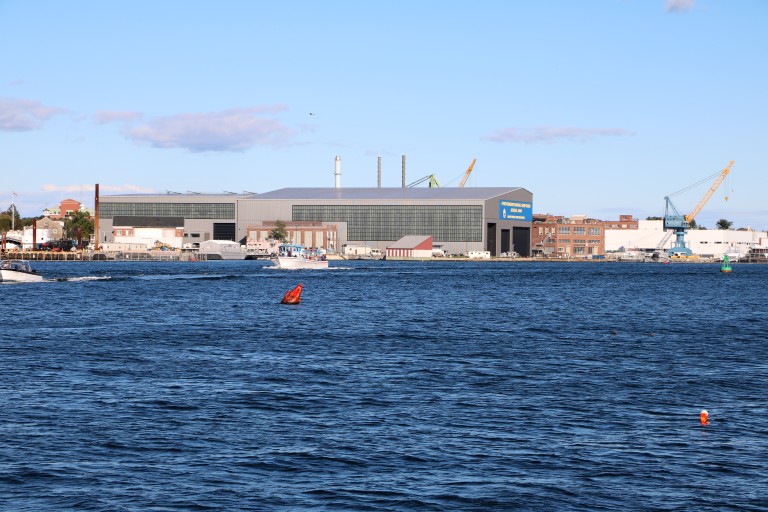 Across the river from the park is the Portsmouth Naval Shipyard – but it’s really in Kittery Maine.

From the park we saw a replica of a gundalow which was the type of boat that was used around in the revolutionary times. History says that four months before the historic ride of Paul Revere, the patriots of Portsmouth moved ammunition out of nearby fort William and Mary using these flat bottomed cargo vessels. 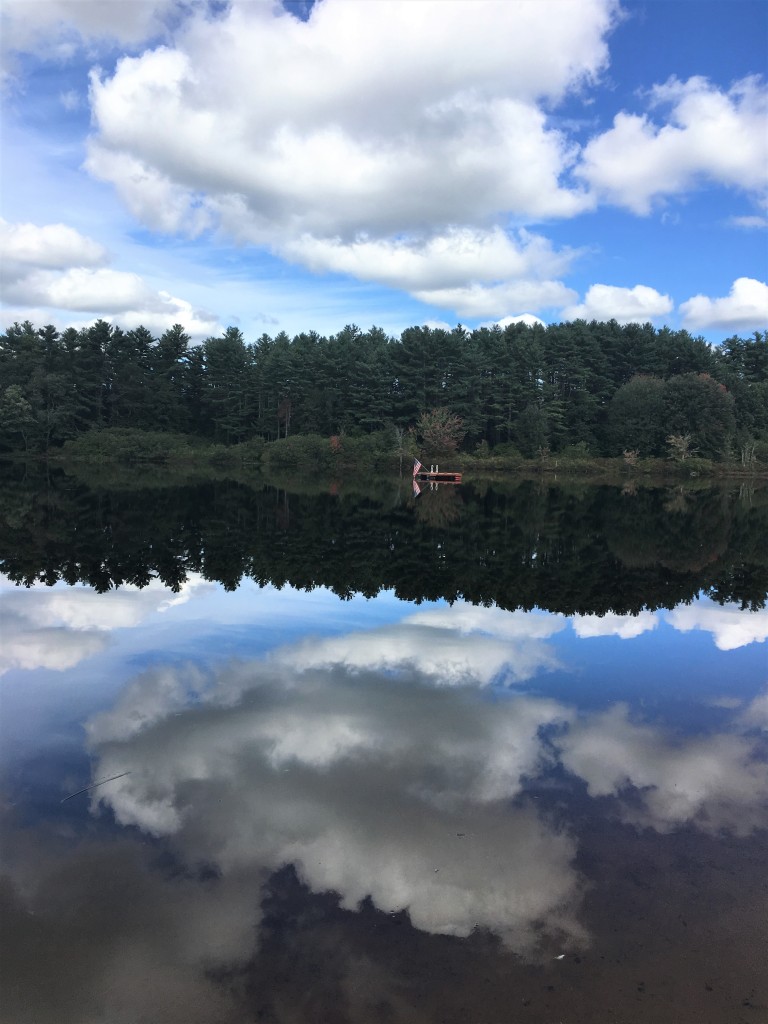 Above is the pond in the campground we stayed in Raymond. While staying there we took a day trip to Concord. 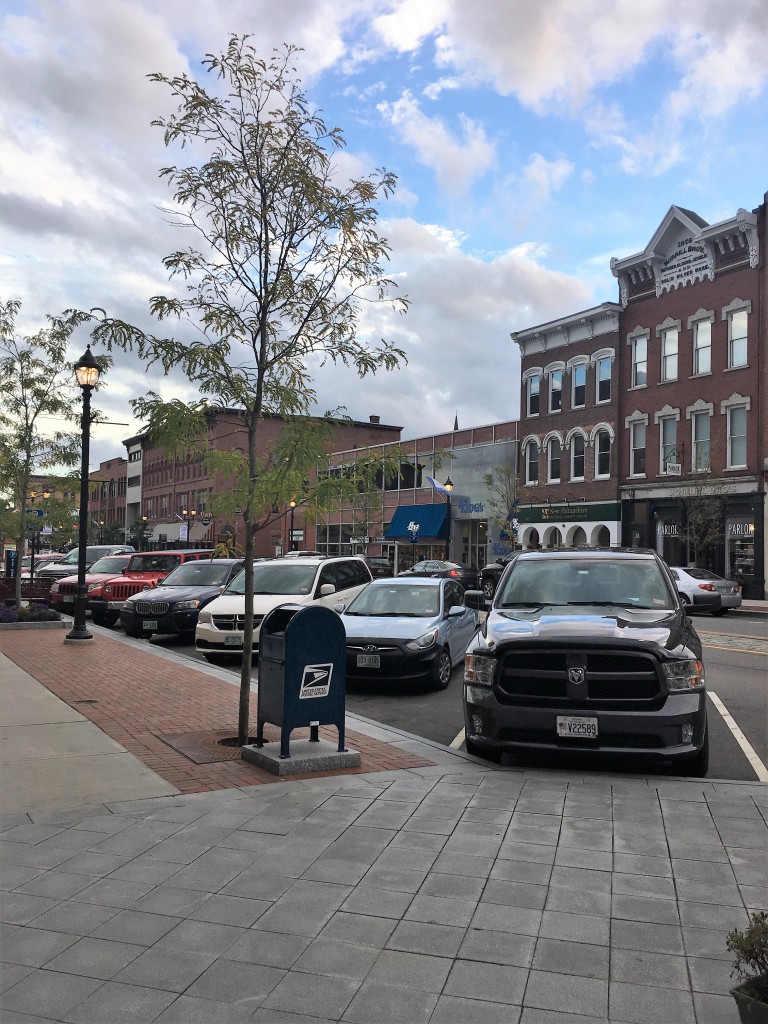 Concord is the current capital of New Hampshire and the downtown and surrounding area had lots of 19 century buildings.

In front of the statehouse building there is a statue of Daniel Webster.

Inside, the walls are lined with very old portraits of important New Hampshire natives. I didn’t mean to feel disrespectful but some of them reminded me of the haunted house ride in Disney World.

After our short stay in New Hampshire, we returned to Massachusetts and reached the end of our trip.