After ten days of  docking in the state fairgrounds parking lot, we were ready to leave the sights of  Pueblo and the Newmar Rally for the wide open spaces of the Durango, Colorado area and Mesa Verde National Park.

We stayed at the Mesa Verde RV Resort which is actually north of Durango in Mancos. Our site was large, all grass, with water and electricity but no sewer hook-up. We did have to pull up stakes and move to dump once during our stay which was a minor inconvenience. The view more than made up for it though!

Before we ventured into the national park, we took a couple days to explored the area via the scenic driving loop of the San Juan Skyway. 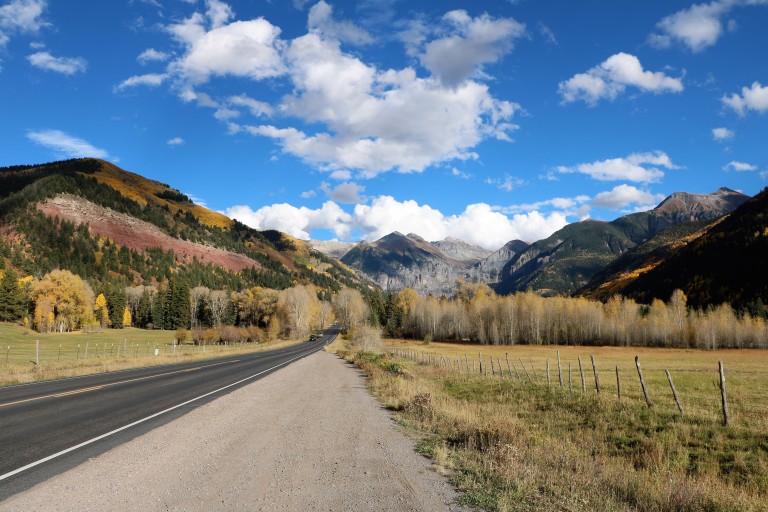 I found the map below on the web, click on it to be directed to the site it originated from. By the way – I don’t know anything about the Pine River Lodge – they obviously have some connections to the map maker! 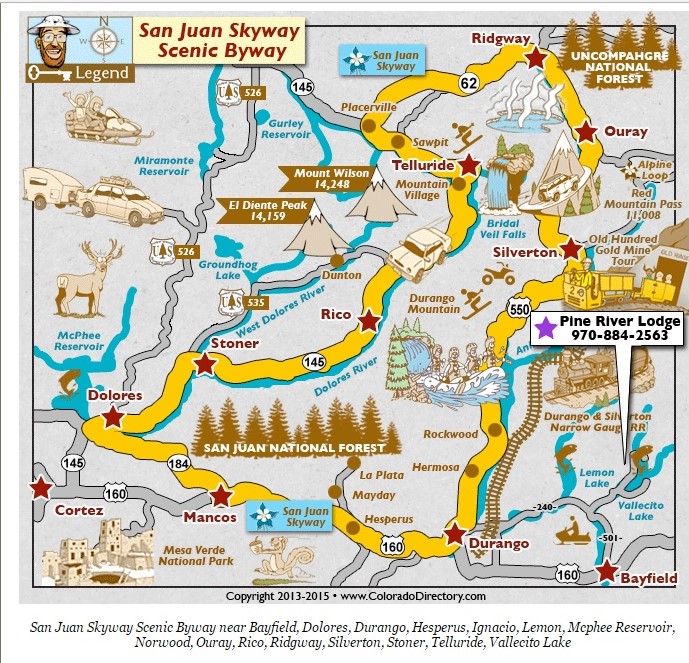 On our first jaunt out, we drove the Jeep from Mancos up to Telluride, then back again. The complete circle is supposed to take seven hours with some steep drop-offs along the way, so we didn’t want to drive it in the dark.

The San Juan Mountains were amazing!

The clusters of yellow aspens nestled among the pines just glowed against the dark background.

Telluride was a former mining town and has a National Historic Landmark District, but today its a ski destination for the hip and famous. Its full of spas, pricey shops and expensive restaurants. We just quickly drove around so we missed out on partaking any of the above. In the summer months they have several music, film, and wine festivals. When Roy found out Neil Young had played there the night before, he was a bit chagrined that he had missed it.

The next day we did the Durango to Silverton loop, only this time we traveled by bus on the way up and took the historic Narrow Gauge Railroad back down.

The bus driver told us the history of the area and stopped a couple times so we could take photos. There was fresh snow on the mountains and the higher we went up, the colder it got. 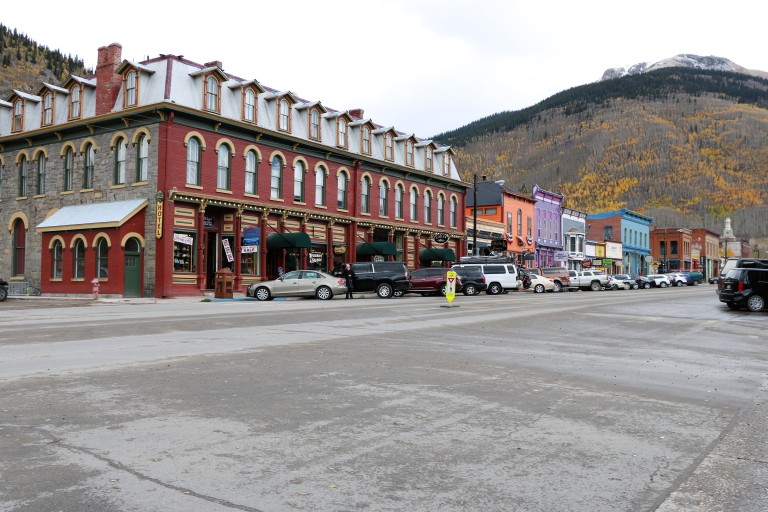 Silverton was established as a mining camp. In the late 1800s it unearthed gold and silver, then during World War Two, the town smelter was used to produce uranium. The mining dried up after the war and in the late ’60s, Silverton and the Narrow Gauge Railroad were designated as National Historic Landmarks.

We wandered past all the touristy shops to the end of the town and found the Mining Heritage Center and 1902 Jail which is run by the San Juan County Historical Society. 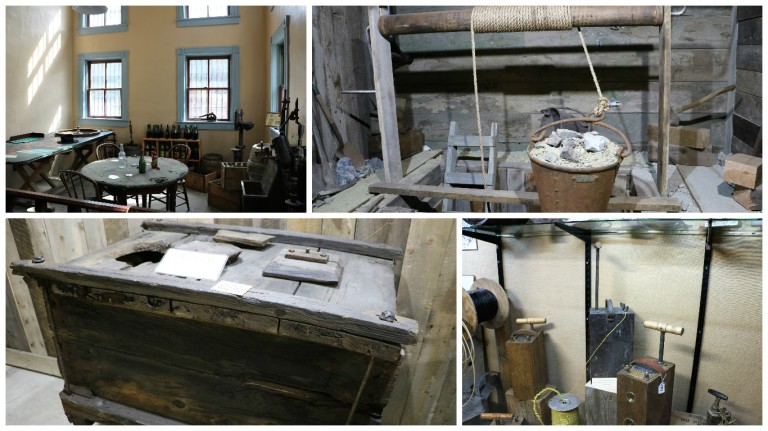 See the little mining cart in the bottom left of the collage above? It had a special purpose; it was a portable latrine that just rolled right along side of the miners… or maybe they kept if in a dark corner!

The museum was full of collections of tools, lanterns, and anything mining related. I had to chuckle when I saw the label on an oil can in the top photo on the left! 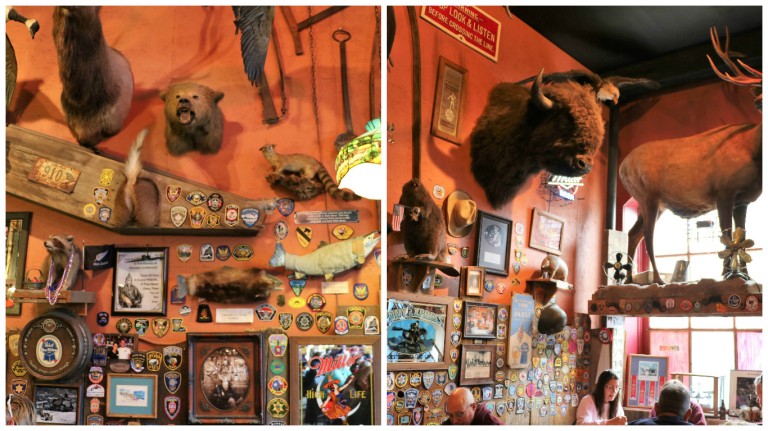 We ate lunch at Handlebars Restaurant and Saloon which happens to be #1 out of 22 on TripAdvisor. The food is nothing special, just basic bar food, but their decor is interesting. It’s a vegan’s nightmare but a taxidermist’s dream. My personal favorite stuffed animal was the furry fish seen in the middle of the left photo above. The sign below it said “Colorado Fur Trout, Extinct”.

After lunch, it was time to get on the train for the trip back to Durango. It was cold and had started to snow so I was ready to see the countryside from a window. The railroad was completed in 1882 and although its main purpose was to bring supplies up and precious metals down, it was also used for tourism even back then. 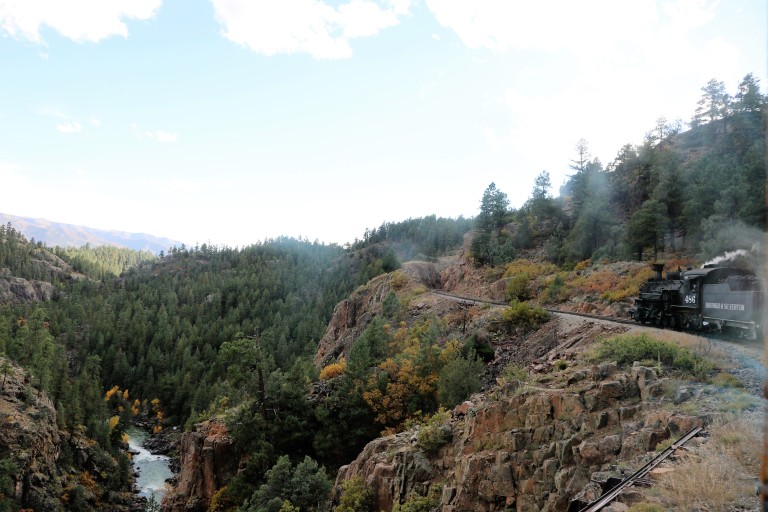 Above is a view of the engine in front. The train tracks ran along the Animas River which is a tributary of the San Juan River. The Spanish name is Rio de las Animas  or River of the Souls.

Above is a view of the back of the train. I wish the photo would have captured the gorgeous icy blue of the water. In August of 2015 it turned orange after a crew working for the EPA accidentally spilled three million gallons of waste water from the Gold King Mine which had been closed since the 1920’s.  It looks beautiful again, but who knows what lurks in the silt at the bottom…

Above is the view we saw as we were getting closer to Durango.

Above left is the train station. On the right is Main Street; the far end building in the photo is the restored Strater Hotel. We ate in its Diamond Belle Saloon.  I definitely felt like I was in the Long Branch Saloon from the old TV show Gunsmoke and I kept waiting for Miss Kitty to come out and ask us if we were new in town.

The entrance to Mesa Verde National Park was only about five minutes from our RV Park, just off of Highway 160.

The Visitors Center is just about five years old. We loved the well done displays inside.  We purchased guided tour tickets for the next day – they sell out fast so we were glad we could buy them ahead of time.

From the Visitors Center, it took us an hour and 23 minutes to get to Chapin Mesa and the trail head of the hike we wanted to take. The road just goes up and up with some switch backs and not much shoulder, but the views are amazing!

We took the Spruce Canyon Trail which starts off by going right past the Spruce Tree House cliff dwelling. The paved walkway was blocked off to prevent people from being tempted to walk through it, but it was easily scene from where we were standing.

The trail wasn’t all that difficult, but it did drop straight down.

I think the biggest safety concern would be people leaning out too far to get a great shop, and then losing footing.

This view was the big payoff at the end of the hike!

After the hike, we visited the museum which is right by Spruce Tree House. Then we climbed back in the jeep and drove the loop that goes past several visible cliff dwellings and sheltered ruins. Above is a Pit House that was used for ceremonies, cooking and sleeping. It’s estimated that this was built somewhere around A.D. 700 – 950.

The cliff dwelling above is called Sunpoint View and was thought to be built around A.D. 1200 – 1300.

We also saw this cute guy on the road. He checked us out for a little while before running off! 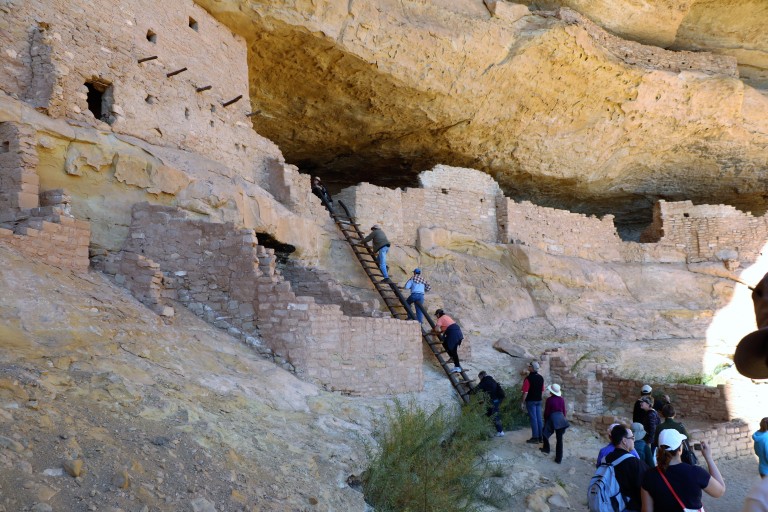 The next day we drove one hour and eight minutes from the Visitors Center to Wetherill Mesa for our tour of the Long House cliff dwelling. Roy is at the bottom right of the photo. We all climbed up the ladder to see…

The fabulous view these people had!

Corn was everything to them; it was their main source of food and was depicted in art work on jars to walls. See the cob imprints above? I was so inspired by my Colorado corn experiences that I posted a Colorado Creamed Corn recipe on my food blog! They were living in such rough arid conditions that they had to conserve every bit of water they could. At the top of the collage above is a water hole. When it filled up, a little stream of water ran on to the next hole. Notice the hand print on the lower left? Eerie!  It is assumed that eventually these ancient people left the area due to continued drought conditions. Anthropologists think they relocated to the Santa Fe, New Mexico area.

I actually couldn’t believe they let us walk around the ruins! The ranger talk was so interesting and I’m so glad our national park system provides visitors with experiences such as this. 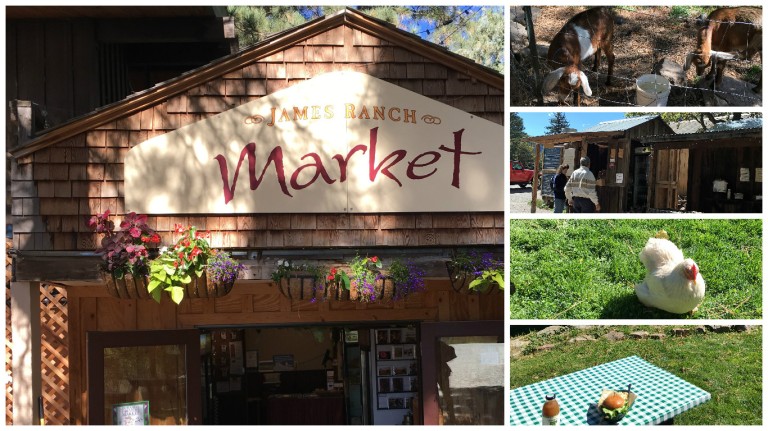 It wouldn’t be right if I didn’t mention James Ranch in Durango. I had the absolutely best burger of my entire life there – I swear! It’s a cattle ranch run by a family; each of the five grown-up kids found their way back and work in an aspect of the business. One son makes cheeses, ice creams and etc. and sells them in the market along with grass fed meat and organic veggies. A daughter runs the Harvest Grill & Greens where I had my scrumptious lunch. After we ate I bought all kinds of stuff from the market and we thoroughly enjoyed it all!

After loving our time in Colorado, our next stop was New Mexico – Sante Fe and a bit of Albuquerque…