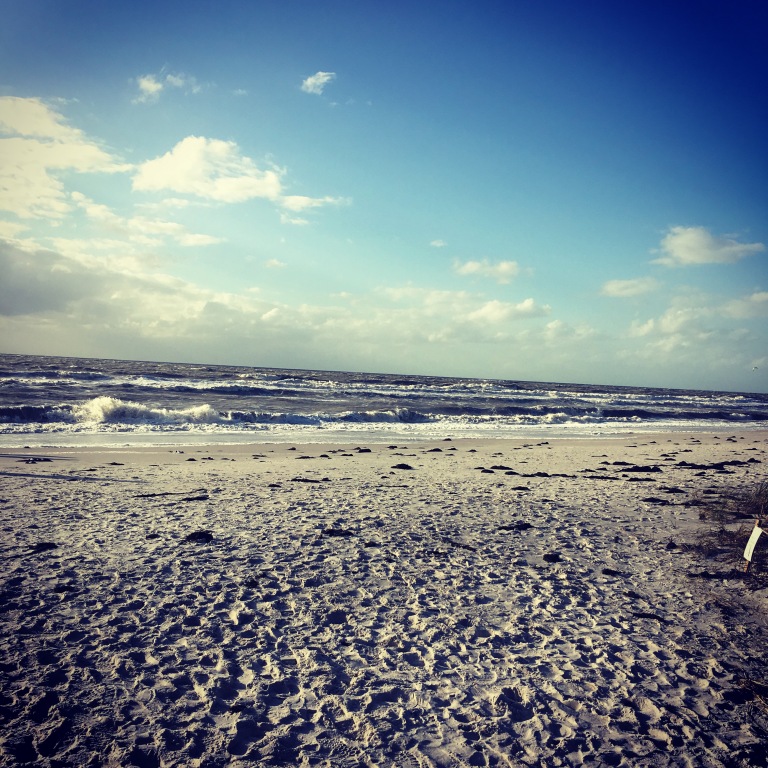 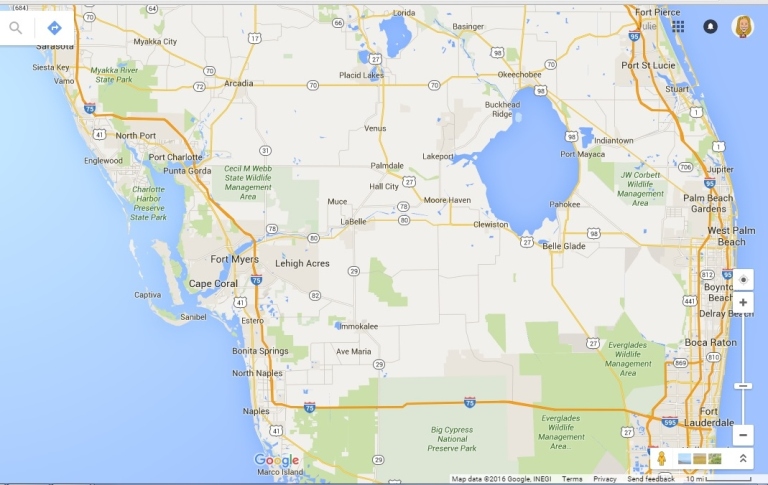 After a rainy week on Marathon Key, we ventured a bit north to spend the rest of the month of January in Central Florida. Our first stop was Okeechobee KOA Campground where we got to spend time with our friends Jim and Carla. Here we got a reprieve from the rain, but not from the cold. I know it’s all relative – that while it may have been 17 degrees at home it was in the 50’s there – but still, I was disappointed that it wasn’t warm enough to enjoy sitting in the sun and enjoying the beautiful pool the park had. Everyone kept commenting that they had never seen such a long span of rain and cold in all the years they had come down to Florida during the winter. The consensus was that it was due to El Nino which had brought about a roasty toasty December, but now was responsible for cooler than normal January and beyond. Even though it wasn’t warm enough to swim, the campground had plenty of organized activities we partook in, such as yoga, crafts, Bible study, bean bag baseball and indoor power walking in their huge community center. As we are finding out, a lot of RV people pick a particular park, and hunker down for one to three months. The result is a small town like feeling where everyone knows each other and different groups seem to form. At the Okeechobee KOA, everyone seemed very welcoming and friendly. Well almost everyone… 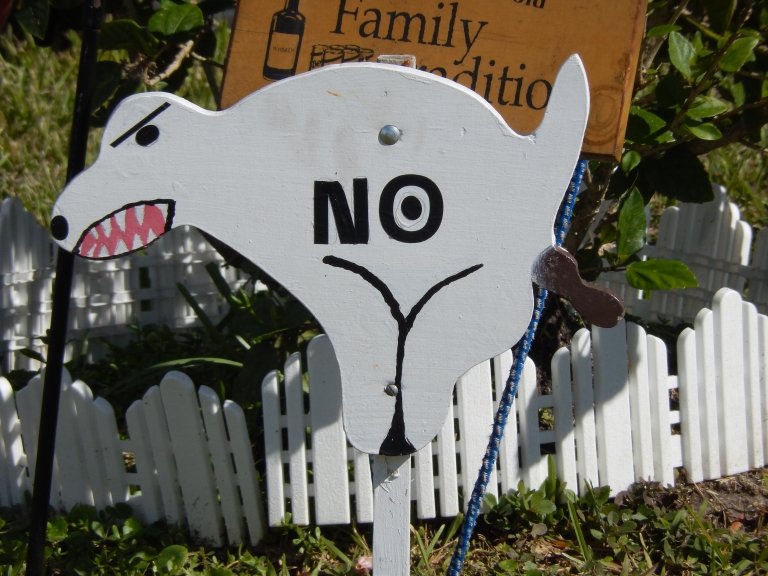 This disgusting sign was staked in the ground on our next door neighbors site. Typically, every RVer one could ever meet travels with a dog they dote on and adore. Obviously not these people. Within five minutes of us pulling in, the man was shouting out from his trailer window at us. “Take your dog to the dog park, we walk on that grass!” Funny thing is; we were on our own site, I was standing over tiny eight pound Vanilla with a plastic bag immediately ready to retrieve anything that might have appeared, and the rule is that another camper never walks onto someone else’s site unless as an invited guest. I guess it goes to show that all different types of people make the world go round and most stereotypes were made to be broken. Of course we were very careful never to let Vanilla get near his area, but I learned later that one guy let his dog “use” this grumpy man’s yard just because of that sign.

The Okeechobee KOA has a little fast food snack bar restaurant that is open from seven in the morning to six at night. We never tried it, but did have one hilarious experience when we did decide to eat out one night. The computer repair guy in town told Roy and Jim that the best place around to get a steak was at a restaurant called The Speckled Perch .  When we got there, I actually climbed back in the car because it looked that bad from the 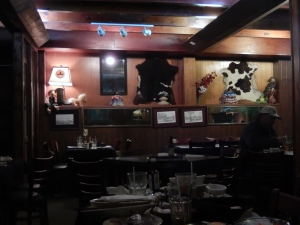 outside. However, Roy talked me into giving it a try. Once inside, I felt like I was back in the ’60’s going out to eat as a kid. On the table were fake wicker baskets with individually wrapped crackers and butter in those little packets. What was really a hoot was the interior; there was an assortment of small unidentifiable animal skins on the wall along with other various knick knacks. The menu sported a picture of a cowboy riding a bucking bronco while proclaiming, “The Speckled Perch: Don’t Let the Name Throw You!” In fact, there was not a single fish dish included in the bill of fare at all. The best tasting thing we sampled was the relish tray of two pieces each of celery, carrot, and radish with a really good homemade ranch dressing. It went sort of down hill from there. When Roy’s rib eye appeared, it looked suspiciously like a sirloin. The waiter assured us it was indeed a rib eye, but Roy had his doubts. I’d give the place three out of five stars. 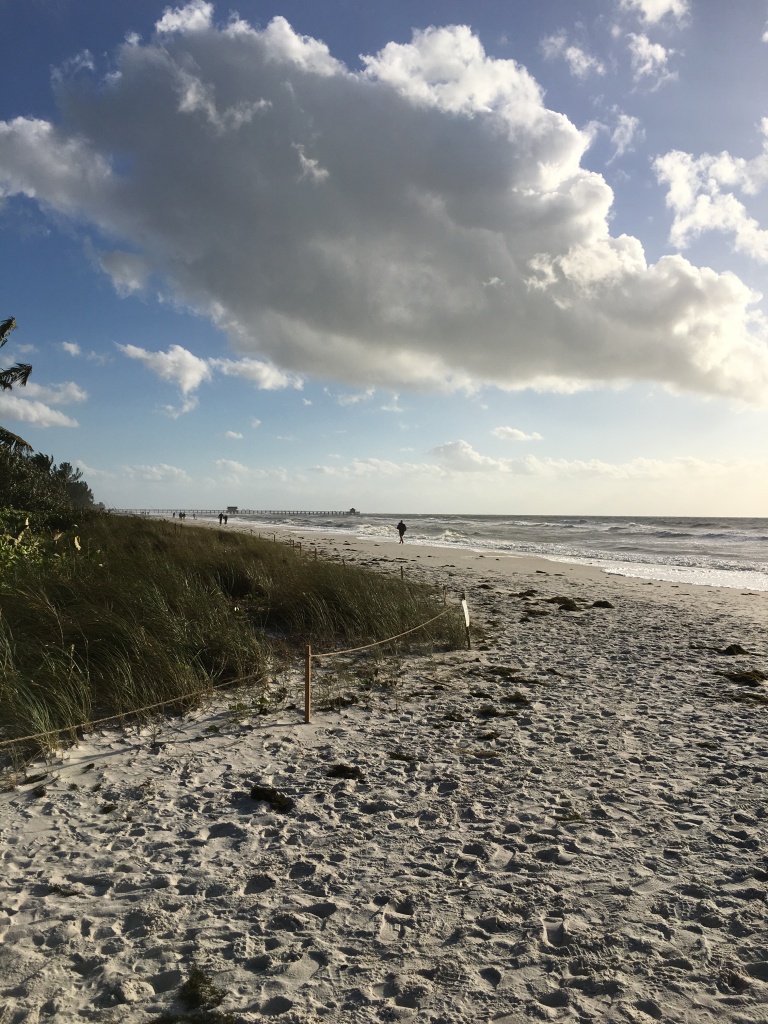 A rare sunny day at the public beach in Naples, Florida

From Okeechobee went back down south to Club Naples RV Resort.   I am not kidding when I tell you it took about half an hour of strategic small inching moves and an onlooking crowd of about 15 people to get the RV into the site there. We had a lot of trouble even finding a place to stay in the Naples/Fort Myers area because we had waited too long to plan out our itinerary. When I found this park online, all the reviews said it was tight. Yet all the Florida parks seem to have small sites meant for the RVs of years past, so I just thought it would be like every other campgrounds. Wrong! This was truly nail biting with the narrowest streets and sites we have encountered so far. The few people we met were nice and friendly, but the weather turned rainy and cold again so opportunities to participate in activities were few. One thing we did enjoy was joining the group that watches NFL games in the club house.

Even though the weather was crummy, getting to see several friends from home while they were vacationing in the area was a bright spot. That meant getting to venture out to some restaurants that knocked the Speckled Perch out of the park. 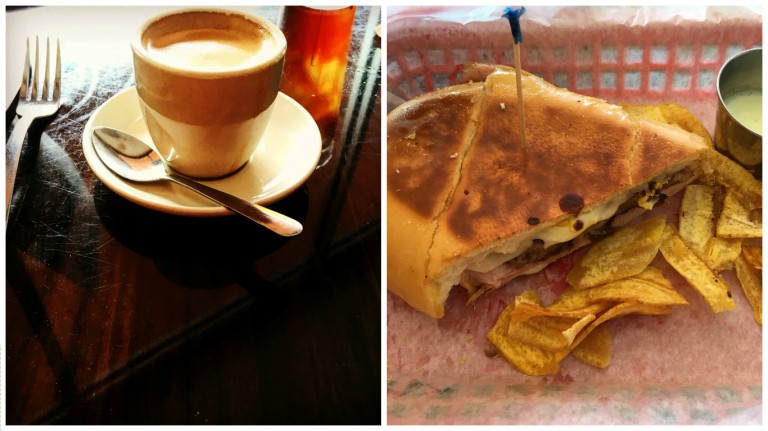 The Rumba Cuban Cafe is Naples #1 restaurant according to trip advisor. It was awesome! The coffee was strong and sweet and the Cubano sandwich was delicious. I was so taken with it that I posted my copy cat version on Yates Yummies. Click here for the recipe. 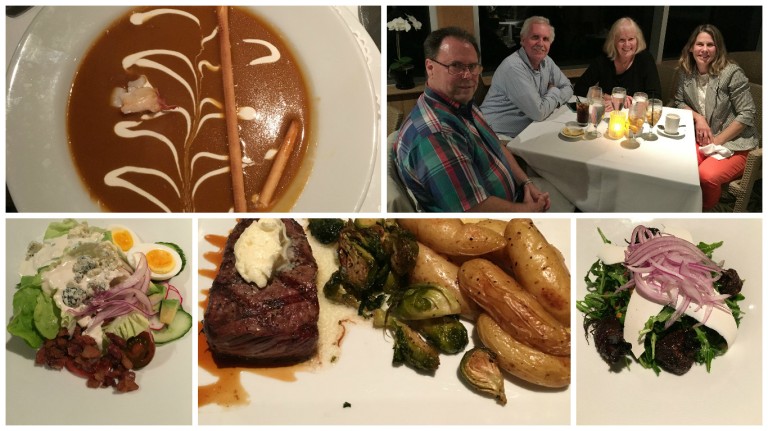 One cold and rainy day, we met our friends Rick and Mary who were staying on Captiva, at the Miromar Outlet Mall in Estero which was filled with plenty of upscale type vendors offering lots of post Christmas sales. Roy loves a good deal so I was very happy to find them! We worked up quite an appetite so we ended up having dinner at the restaurant in Naples Beach Hotel & Gulf Club, HB’s on the Gulf. Unfortunately, the weather was too awful to eat outside but we had a great meal; my favorite thing was the roasted beet salad. Thumbs down on the lobster bisque, however. It had a great presentation but tasted a bit off. 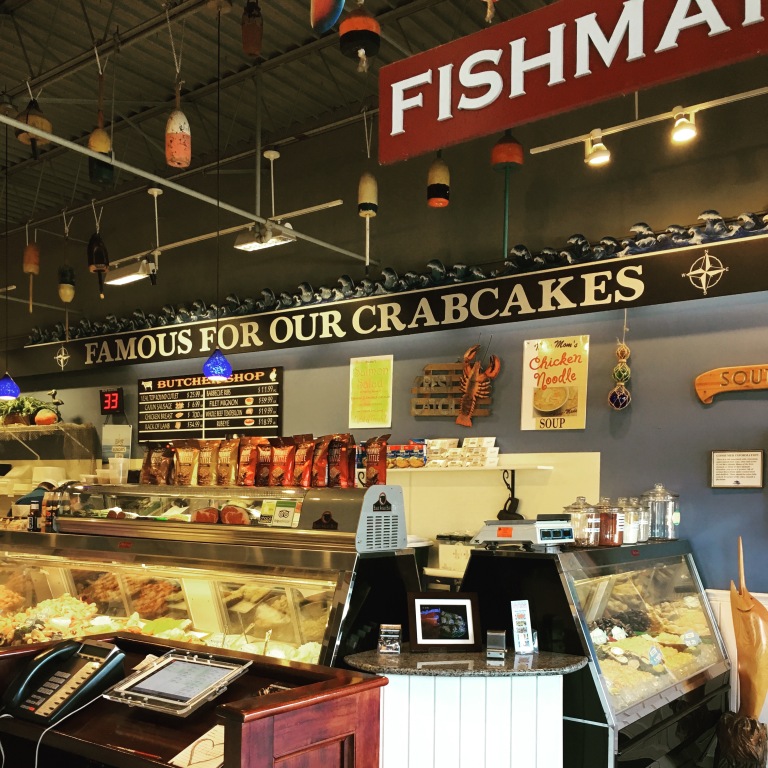 We had a great lunch with Judy, a high school classmate and Sunday School buddy of Roy’s, at Swan River Seafood.  Their crab cakes were great and the restaurant also included a nice seafood market. Just a few doors down from our lunch spot was a fabulous chocolate shop. 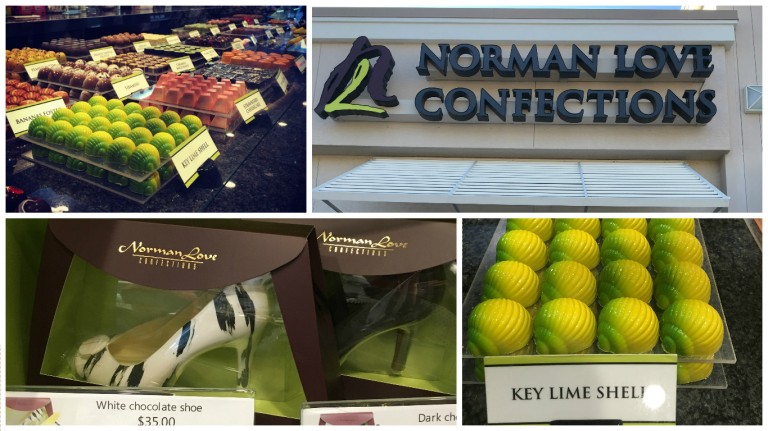 Norman Love Confections had the most beautiful looking chocolates ever! I sampled a white chocolate lemony one – delish! 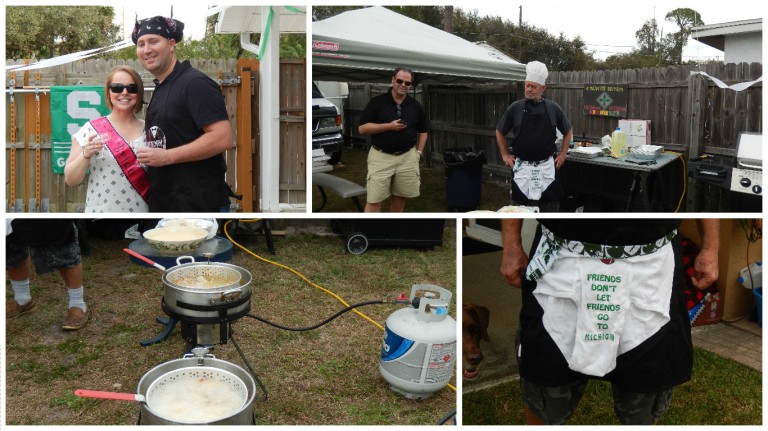 Of course we drove over to Port Charlotte to attend the Bell Family Fish Fry given by Roy’s cousin Beth and her husband John. Roy got to see his Uncle Jim (Beth’s dad) and we all celebrated the upcoming wedding of the Bell’s daughter Jennifer and her fiance Eric. As usual the food was delicious, and the stories were many as were the shenanigans. 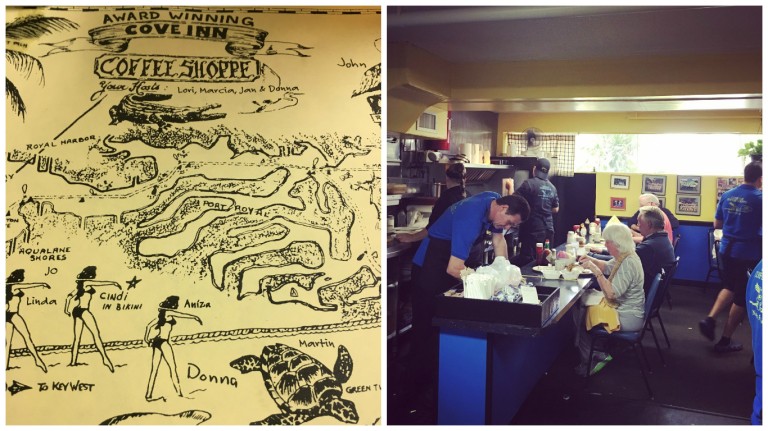 On the last day we were in Naples, we went to breakfast at the Cove Inn Coffee Shop . Nothing fancy, just a kind of throw back to the way Naples probably was about 30 years ago. I had corned beef hash with an egg on top and split an order of pancakes with Roy. It was a fun place to go.

Before we left the Naples area, we spent an entire day driving around trying to scope out possible RV parks for next year. Roy had done some internet research and made a list of campgrounds that included the amenities we would like such as full 50 amp hookups, cable, swimming pool, and tennis courts. The demand for those type of sites has become so high that a request can be made for an advance reservation, but it will not be confirmed until April or May. Asking for three months – January 1 to April 1 – yields a better chance than just asking for a few weeks. Roy and I aren’t ready to stay in just one place all winter but realize that if we don’t plan ahead it’s hard to find a place in the nicest parks.

Seen, as we travel homeward- #throwback #oldschool
Happy Birthday to my daughter and wonderful new mom @cpank320 ! Here’s to a wonderful year ahead! I’m sending billions of virtual hugs an kisses to you! ❤️♥️❤️♥️❤️♥️❤️♥️❤️♥️❤️♥️❤️
Gorgeous courtyard of public library in #naplesflorida #perfectday
My #lunchtime today - faux pho with marinated flank steak- both from yatesyummies - such #easyrecipes
Perhaps a healthy side among #superbowlappetizers ? Roasted #cauliflower is hanging out in a vinegary, cumin and garlic infused sauce. New on yatesyummies.com
End of a good day #vanderbiltbeach